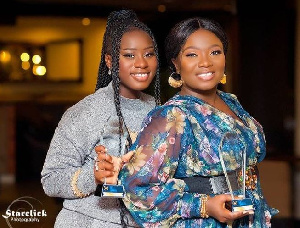 While Mrs. Amoateng was crowned the Outstanding Public Personality of the Year, teen rapper Calista was adjudged the New Artist of the Year.

The event was held at the Golden Tulip Hotel in Accra on December 4.

According to organisers, the scheme seeks to primarily project social media by awarding excellence in the digital media space.

While it is Calista’s second win after she was announced the Young Artiste of the Year at Emerging Music Awards, it is Mrs. Amoateng’s ninth in 2020.

The 2019/2020 Radio and Television Personality (RTP) Personality of the Year was adjudged the Media Woman of the Decade at the National Communications Awards held on Saturday, November 14 at the Africa Trade House.

The host of ‘Restoration With Stacy’ also has to her credit an honorary award given her at the Humanitarian Awards Ghana 2020. This was a recognition of “the distinguished and exceptional achievements towards improving the lives of others and human welfare.”

Not long ago, she was honoured with a Gorbachev Peace Award for her demonstrable role in the media.

01/09/2020 SAMSPOP
VGMA 2020: All must-see outfits from the red carpet The second day of the Vodafone Ghana Music Awards (VGMA) took off on a high note on the red...
Close